Feast as a Mirror of Social and Cultural Changes 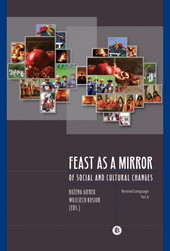 “Introduction: Feast as a Mirror of Social and Cultural Changes” [Bożena Gierek]

“In the widest sense all of the essays deal with questions of identity in one way or another. Most of the papers are based on ethnographic research, with a keen awareness of historical processes of change, deriving no doubt in several cases from the long period of time during which the ethnography was carried out – Minniyakhmetova from 1980 to 2017, Nowicka from 1993 to 2014, Umeya from 1997 to 2017. Gierek’s introductory essay gives a lucid and wide-ranging overview of approaches to the study of festival.”

“The thematic monograph devoted to feasts celebrated in various cultural circles and ethnic groups of the modern world is a very valuable proposal of a publication covering the global phenomenon of cultural changes. One of the advantages of the work under review is that authors of individual chapters take into account  both historical determinants of the cultural tradition and modern forms of celebration that can be captured in empirical research conducted by ethnologists and anthropologists of culture. […] The aim of the thematic monograph is to capture these changes that occur more or less spontaneously due to actions taken by people taking part in celebrations. The capturing of processes during their progress allows us to carry out comparative analyses. Thus, the contents of individual part and chapters of the work allow us to reach more general conclusions, which helps to establish the theory of cultural changes based on solid empirical grounds.”

For the snippet view of the book click here.