The Temple Road Towards a Great India. Birla Mandirs as a Strategy for Reconstructing Nation and Tradition 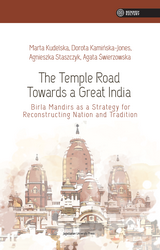 The book is a results of research carried out within the National Science Center project - "Birla mandir - modern Hindu temple complexes as an example of modernization by going back to tradition" (2014-2018) [UMO-2013/09/B/HS1/02005].The research work, aimed at collecting documentation about the temples and conducting a preliminary analysis, included 19 temple complexes founded from scratch by the Birla family from the 1930s until the 1990s. Among them we may enumerate the best known and the most recognizable - for example, Shri Lakshmi Narayan in New Delhi - as well as smaller shrines, which are more local in character such as Rama Mandir in Akola (Maharashtra). All of them were visited during three fieldwork trips, and many studies were made in order to establish the most important issues relating to the origin and idea of a modern temple in the national context in pre-independence India. The authors thus posit that the Birla Mandirs are a specific conveyor of a message not only religious, but with a significance that permeates other layers of social and political discourse. This message may have a bearing on the socio-political thought of independent India as it was supported by the creation and propagation of ideas related to identity and a national art. It was thus important to identify the basic strategies and means of communication used in the whole Birla project - whether and how the temples represent hierarchical Hindu inclusivism which, although it considers all religions as equal, treats Hinduism in a unique way, as the most perfect form of religion. Therefore, it was also important to examine whether the temples and the religious activities undertaken in them apply Eric Hobsbawm’s concept of "inventing" tradition, and whether traditions created (or ‘modernized’) in contemporary times are a way to increasing the attractiveness of the message that flows from the Hindu temple to society. Since Birla temples have not yet undergone a comprehensive academic study that looks at all aspects of the Birla project as a highly coherent enterprise, it was one of the authors' main objectives to gather the most detailed photographic material documenting the architectural compositions and the iconographic program. Also, an important element of the field research were interviews with temple management and priests, complementing information on the history of the temple and its founders. In some temples, it was also possible to hold conversations with the visitors. In order to support the main hypothesis, the authors defined the Birla project as foundations for the spiritual and political power of modern India through a new reading of Indian tradition, in line with the challenges of the 20th century and using the medium of a modern Hindu temple. The narrative and message employed in the Birla Mandirs are built on a traditional Indian story, where attention is mostly focused on śruti, smṛti, or the later hagiographies and teachings of eminent leaders, rulers, saints and spiritual teachers. Thus, the purpose of the book is not to critically analyse the narrative expressed in and via the Birla Mandirs, but to reconstruct its axial motifs, taking into account that the message of the founders was comprehensively simplified, and that the visitors to the temples, which are increasingly treated as living museums or galleries rather than temples of worship, have the chance to become acquainted with the overall vision, without penetrating the individual ideas or ideologies that constitute it. The book consists of two main parts. The first - "Assumptions, objectives and scope of research" - is introductory in nature. In Chapters 1-3 the temples are presented and characterized along with their classification and the main idea guiding their founders is given, set in the broader context of the history and shaping of the idea of ​​charity in India together with the ideological context and sources of inspiration. This part of the book (Chapter 4) also contains an analysis of the concept of Indian national art - its genesis, development, character, meaning - thereby determining the main line of interpretation of the examined temples. The second part of the book - "Analysis of the program - selected issues" - is devoted entirely to an analysis of selected themes appearing in the program of the Birla Mandirs. Starting with a general set of characters and scenes in the temples décor (Chapter 5), it subsequently presents the upanishad themes (Chapter 6), the interpretation of basic Hindu values through Gītā ​​(Chapter 7) and some specific thinkers, philosophers, religious leaders or ascetics (Chapter 8). The struggle for the defence and maintenance of Hindu/Ārya dharma is dealt with in the following part (Chapter 9), complemented by an analysis of a woman’s place in the ārya tradition (Chapter 10), and the role and meaning of elements of the Buddhist tradition in the temples (Chapter 11). In the concluding chapter (12), the authors reveal the temples as a kind of "cultural media" whose aim - apart from their obvious cult function - was to create a new, conscious Hindu identity by inventing a tradition or building a collective memory that refers to the past but at the same time meets the requirements of contemporary times. The text, in specially designated places, also features some additional information that is relevant for understanding the reasoning presented throughout the book - these include definitions of the key terms used, as well as short profiles of the characters who were important for the Birla Mandir project. The overall analysis is supplemented by tables: a genealogical tree of the Birla family, a chronological list of temples along with some basic information about them and a list of all the deities and figures appearing in the Birla Mandir decorations.