Yoga in Poland from the late 19th century to 1939: Esoteric Contexts and Interpretations 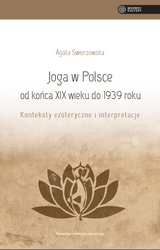 The aim of the book is to examine the complexity of ideas related to yoga in the period from the late 19th century to 1939 in Poland, along with the esoteric context from which it grew and to which it remained dependent. The author's study forms part of the current research into modern yoga.
The starting point of the research is established, on the one hand, by the esoteric context which determined how yoga was interpreted in the West and created an environment in which yoga could spread and undergo further interpretations, and on the other, by the first mentions of yoga that emerged and originated from Polish sources.
Book preview available here.