Talking about color in painting 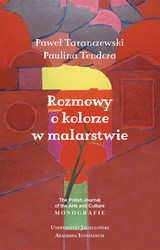 In the book Talks on colour in painting the authors consider the classic approaches to the issue of mixing colours, including the ones of Jan Cybis, Władysław Strzemiński, Josef Albers, Rudolf Arheim i Johannes Itten in particular. The talks are hold with respect to methodological correctness in a honest, analytical and multidimensional layer manner. As an assumption the authors avoid using metaphoric words, figurative expressions or poetic forms. However, they do not avoid references to the Witlacy’s “methaphysics of colours”, as well as the “methaphysics of colours” of Wassily Kandinsky or Paul Klee.

As a foundation for the talks the traditional philosophy, the philosophy if beauty is bein laid as the neoplatonism of Własyslaw Stróżewski is included here. A lot on the Profesor Paweł Taranczewski’s competence says the very fact that he’s an absolvent of the Dept. Of Painting the Academy of Art in Kraków and he is a painter himself. He brought his sensitivity in this realm as something taken from his family’s home, form the Master’s – his father Wacław Taranczewski, studio. Talks on colour in painting is a continuation of Paweł Taranczewski’s and Paulina Tendera’s series titled Talks on painting (2016).

Reading Talks on colour in painting I wondered what kind of meaning this book has today, when our eyes got used to digital colour palettes. Since a few decades we’ve been living surrounded by digital pictures – reproductions of everything that is surround us, including pieces of art and painting. We watch them on screens as they tempt us with bright, backlit colours. We can definitively say: the are distant from reality and nobility of the natural colours.

How then, in such reality, a painter and a consumer of his art find themselves? Let us not be misled by plain judgments, this dissonance appears at the very beginning of the creativity process. A picture on a plain is a resultant of multiple factors: a painter’s determination, his sensitivity, and imagination, and colorist’s painting intuition, supported by the science on colours.

A picture is being created in a space lighted by the light of the space and then is being watched in radically different circumstances, usually in different light too. Colorful spots totally change its intensity, new associations between them appear and are far from the author’s intentions. Thus, in our imagination a re-reading of the author’s message takes place, adapted to individual knowledge and sensitivity. We perceive the colours intuitively, according to a personal memory code of colour patterns. Why I do find the book worth reading and would recommend to immerse oneself in the authors’ narration? The book’s major value is a sight from a distance on the questions connected to colours and their mutual interactions on the plain of a picture. We won’t find ready-made solutions or suggestions, but it will set into motion a painter’s imagination and for the others will became a source of an important knowledge.