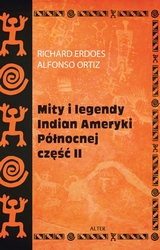 The book contains includes over a hundered myths and legends of the Indians of North America, which appear for the first time in Polish translation. The stories included here come from different parts of North America – from the Gulf of Mexico in the south to the Canadian Arctic in the north, from the Great Lakes and Appalachian Mountains in the east to the Pacific Northwest and British Columbia in the west. The stories covered by this book are divided into ten thematic chapters (dealing with different issues such as the creation of the world, creation of the human kind, love and sex, trickster's tricks, ghosts and the spirit world etc.), just as it was with the editors of the original version - Alfonso Ortiz and Richard Erdoes. Each chapter opens with a brief introduction in which the editors explain the specificity of the myths posted here and pay attention to some important details. The images included in the Polish release are original designs, drawn from the iconography of rock art and the ceramics of various North American Indian cultures. The book includes an index.

Part I of the book is available here.