War and Culture. The Early Modern Military Revolution in Western Europe and Russia 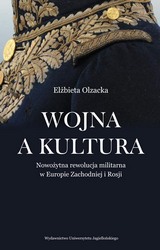 The book demonstrates the importance of the study of the relationship between war and culture, analysing the role of values, beliefs, opinions and attitudes in shaping the ways of war, both in theoretical investigations as well as in historical research. The author, describing the transformation of war that occurred between the sixteenth and the eighteenth century in Western Europe and Russia focuses primarily on changes in the area of intangible culture - the ways of thinking about the phenomenon of war, its meaning and justification, the values and norms associated with the war as well as ideas, beliefs and symbols of war. It is shown how the changes in mentality of European societies, related to the processes "disenchantment of the world" reflected on the ways in which people killed each other on the battlefields and in between, during the protracted military campaigns. One of the main objectives of the book was to highlight the fact that the methods of warfare are shaped not only by the available technology and socio-economic opportunities, but also by the beliefs, norms and values characteristic for some community.