Bushidō. The Samurai Ethos from War Tales to the Pacific War 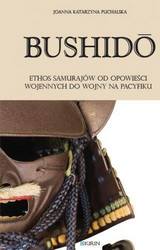 Bushidō, literally meaning "the way of the warrior", is the Japanese equivalent for chivalry. However, it was never a strict code, written down and obeyed by every samurai since their beginnings – even the term bushidō gained popularity only in 20th century. Bushidō is the samurai ethos: it shows values highly regarded (at least in theory) by the Japanese warrior class. These values were shaped throughout centuries by popular war tales, legends and laws issued by the highly ranked samurai. This book traces the most important elements of bushidō and how it has evolved over time, becoming an ideal tool for the aggressive war propaganda during the first half of 20th century and how it later became a popular motive of today's mass culture.

A fragment of the book (in Polish) can be downloaded from here.