The Image of Man in Visual Kei 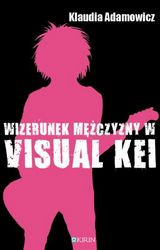 The publication deals with the Japanese phenomenon of the music style called visual kei. Its essence lies in visual effects such as the musicians' image, their promotional videos, concert performances and even on their CD covers; it all leads to the creation of media multidimensionality. Another important feature is that the majority of musicians are men.
The book assumes the form of a monograph showing the multiplicity of forms and diversity of phenomena that draws motifs from both the native and the foreign, especially Western, cultures (e.g. glam rock, gothic motifs). The book also raises the issue of visual kei - Japanese pop culture (e.g. shōjo, YAOI manga) relation, refers the image of musicians to the definition of masculinity in Japan, the body aesthetics, cross-dressing and the characteristics of Japanese theatre.
The whole phenomenon has been depicted as a colourful spectacle, transcultural mix – „The world that does not exist, characters of no existence, gay men who do not have their representation in the real world, the West being only the idea of a non-existent land, childhood which is gone forever, if at all had existed in such an idealized form and even Japan which disappeared with the beginning of modernization – visual kei is a fairy tale that draws ideas from all possible sources creating its own story about the beauty."