The Zoroastrian Minority in Tehran: On Collective Identity in the Context of Shi'a Domination 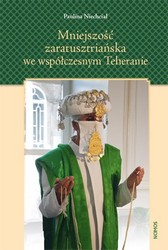 The book covers the issue of identity of the modern followers of Zoroastrianism – an ancient religion, dominant in Iran before the Arabic conquest. As a result of the Islamisation of the Middle East, the Zoroastrian community has been marginalised and decimated. Since the socio-political changes in Iran in the early twentieth century, Zoroastrians remain a recognised religious minority and they are theoretically full-fledged citizens, but in practice are not necessarily protected against discrimination. Among others, this is rooted in the ideological division of Iranian society into citizens professing Iran's state religion and others, imposed after the Islamic Revolution in 1979.
Given the context of the world's only Shi'a religious state, Iran is a very interesting research area, particularly for sociologists of religion. Field studies described in this book have been carried out by the author during her several months stay in Tehran, where the largest and most rapidly growing community of Iranian Zoroastrians lives, yet almost unknown to researchers. An application of the concept of collective identity, largely inspired by Shmuel N. Eisenstadt's ideas, allowed an in-depth study of the group as a social entity, with reference to the broad socio-cultural context.