Home is where… The cultural representations of the domestic spaces 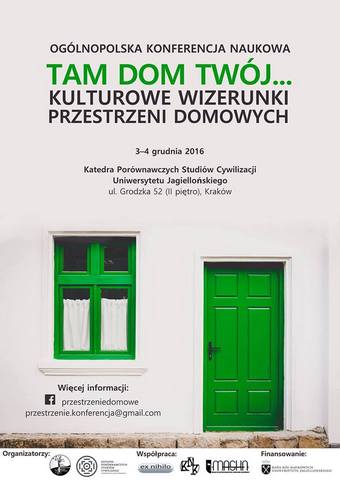 Home is where… The cultural representations of the domestic spaces

During the first weekend of December (3-4.12.16), we hosted the conference concerning the cultural representations of the house-related spaces. The event was organized by the Centre for Comparative Studies of Civilisations of the Jagiellonian University and Comparative Studies of Civilisations Research Group. The conference gained a great popularity among scholars from different universities: the researchers from University of Warsaw, University of Łódź, Maria Curie-Skłodowska University (UMCS) in Lublin and many others participated in the event. The discussions focused on the reflection of the domestic environment in different cultures, the definitions of housing, the meaning of homes and houses, as well as the presentations of the hearth and home in literature, art and film. The interdisciplinary character of the conference allowed to confront different research perspectives and collect the material that will be published in the reviewed monograph.

(the report by: Agnieszka Kiejziewicz)