Jesus and the Christians in the Rabbinic Sources from the Historical, Social, Religious and Dialogic Perspectives 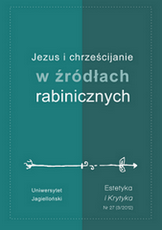 Conference Centre of the Rector of Jagiellonian University, Modlnica (near Cracow)

The Centre for the Comparative Studies of Civilisations

The main purpose of the conference was the elaboration on the image of Jesus and the Christians in the basic sources of the Rabbinic Judaism throughout the centuries. The debate started with an insight into the appropriate passages of the Babylonian and Palestinian Talmuds and Aramaic Targums. The participants also considered historical perspectives while several presentations referred to the sociological and political determinants of Jewish-Christian relationships. Considerable time was devoted to the discussion of the issue in the thought of the particularly influential medieval Jewish thinkers such as Shlomo ben Yitzhaq (Rashi) and Moshe ben Maimon (Maimonides). The conference was concluded with the most recent topics such as the image of Jesus and Christians in the contemporary Israeli media, the problem of the Messianic Jews and the issue of the Jewish-Christian dialogue as the alternative for the teaching of mutual contempt. Throughout the debate several particularly important questions were referred to: Toldot Yeshu – the medieval parody of gospel, the history of Talmud censorship and the famous conflict between Reuchlin and Pfefferkorn.

The material outcome of the conference was the monograph: Jesus and the Christians in the Rabbinic Sources from the Historical, Social, Religious and Dialogic Perspectives, eds. K. Pilarczyk, A. Mrozek, Krakow 2012 ("Estestyka i Krytyka" series).