The Myth of Madness – Sociocultural Determinants of Mental Disorders 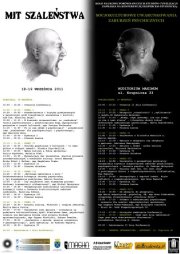 The conference was organised by the Students Research Group of the Comparative Studies of Civilisations. The main problem discussed was the category of madness per se as an aggregate of atypical behaviours. The main purpose of the conference was to bring attention to the issue and acquaint a wider audience with the idea of madness as going beyond the idea of normality.

Each culture establishes some particular norm which disqualifies some people suffering from mental illnesses and various disorders. Madness, however, can be due also to factors other than biological. Those who are socially maladjusted can also be put in the category of mad. This phenomena is observable in the speeches of politicians who claim their opponents to be schizophrenic.

The conference itself was accompanied by a social campaign which aimed at combating the stigmatisation of people suffering from this condition as well as those on the borderline.