The Transcultural Aesthetics of Africa 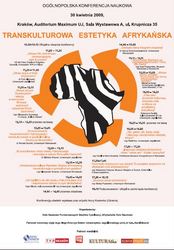 The conference was organised by the Students Research Group of the Comparative Studies of Civilisations and African Research Group. Its purpose was to facilitate an interdisciplinary dispute filling the gap in knowledge of African art and aesthetics. The debate was highly influenced by the conception of transculturality proposed by the German philosopher and art-historian, Wolfgang Welsch. According to this thinker, transculturality is an alternative for the traditional understanding of the intercultural encounter and in essence means the mutual interpenetration of two cultures resulting in the emergence of new qualities. Due to the fact that the whole societies are transcultural, i.e. heterogenic and culturally mixed, we need to resort to various methodologies and languages. The study of art is essentially the study of man and his ways of relating to the surrounding reality which in itself is far from uniform. This is corroborated by the constant and ongoing migration of motives, forms and techniques from the one edge of the world to the other.

The present event took place under the auspices of the Opened Portal Scene of Thought, Superstacja station and Kulturatka.